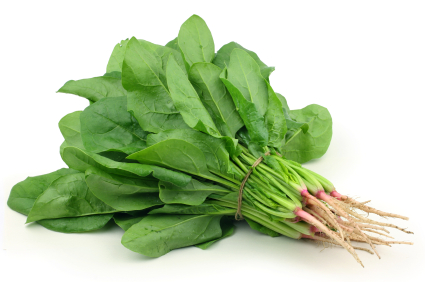 When feeding your rabbit fresh foods you have to watch for the sugar and starch content. Spinach is not on the bad list. However, you should feed it in small amounts because of the higher oxalic acid content.

Can bunnies eat spinach?
It's a yes answer but not a clear-cut one, though. It's a yes because rabbits can eat spinach but it's a no because they have to eat it in smaller amounts than other similar leafy greens. Why? Spinach contains a lot of vitamins and nutritious substances but because of the higher levels of oxalates, we must limit the amount of this vegetable.

Wash vegetables before feeding them to your pet rabbit. You will clean the vegetables from dirt, but also remove the harmful chemicals from the surface. We highly recommend buying organic vegetables as often as possible. Rabbit's digestive system is very sensitive to pesticides.

Here is the problem with spinach. The oxalic acid will bind Calcium/Magnesium/other minerals together, thus will make them insoluble. Therefore, it reduces the possibility of using them in the bone structure. The calcium content might get stuck in the bladder and cause bladder stones.

The stems and stalks have higher fiber content than the leaves, therefore a great benefit for rabbits. The roots have higher contents of sugar because they store the energy, so better to cut them off.

Why are oxalates bad for rabbits or humans?

Spinach is a big source of beta-carotene (provitamin A) which is so important for body development. It also provides a high content of other vitamins (C, E, K etc) and minerals (Calcium, Iron, Magnesium, Folic Acid, Potassium etc) which are required for a healthy rabbit. However, besides these beneficial elements, spinach also contains oxalates, unhealthy in significant quantities.

Oxalates are not poisonous substances like pesticides or toxic plants (eggplants, potatoes, and tomato plants). Oxalates are naturally-occurring food toxins (organic acids) that can hinder your rabbit's urinal tract, and produce itchiness in the skin or mouth if eaten in greater quantities. Still, you should definitely not avoid it when feeding your house rabbit. The good, the spinach offers, is greater than the bad, though.

So, if your rabbit eats spinach regularly, oxalates can become toxic. There are other foods, too, that contain oxalates. So be careful not to feed them together. Here is a list of these leafy greens:

It may also be found in asparagus, broccoli, celery, cabbage, cauliflower, turnips, berries, and carrots, but in smaller amounts.

The one that we really don't recommend, even in small amounts, is rhubarb. It has way too much oxalic acid content than you or your rabbit can take in.

The best feeding recommendations are:
1. Feed 3-5 types of leafy greens a day (only one of them should be from the group listed above). Don’t feed the same greens all the time every week. Mix it up. Variety is key. Watercress and rocket go well with their spinach portion.

2. An approximate amount of greens to feed would be around 1 cup of greens for 2 lbs of rabbit body weight once a day or divided into multiple feedings a day.

3. If one day you feed too much avoid them in the next period of time.

4. Feeding your rabbit spinach once a week, twice at the most, is enough.

Feeding spinach in fall rather than spring or summer is a better choice if you want to avoid oxalates. Winter is the unfavorable season for spinach. Besides the season, oxalic acid content can vary significantly depending on the type of soil. The age of the vegetable seems not to be relevant criteria in the end.

Can rabbits eat spinach and kale?
There is actually a dispute around the level of oxalates in kale. Kale, which is often placed in the high oxalate list of leafy vegetables is actually low in oxalates.

Yet, other studies have shown the opposite. We cannot be certain of the level of oxalates in baby spinach as it can depend upon a variety of factors like season or soil.

What about canned or cooked spinach? For wild rabbits or baby rabbits?

Can rabbits eat canned/cooked spinach?
Rabbits are incapable to properly digest cooked food. It's not certain if the process of cooking can lower the oxalic acid content from spinach, but either way, you should never feed it cooked to your bunny. Canned spinach is another form of cooked spinach with salt and water. They are better off eating raw spinach and they will enjoy it even more.

Can rabbits eat frozen spinach?
We don't recommend frozen veggies like spinach or other leafy greens excepting kale. Freezing kale seems to maintain a good texture. They remain with fewer fibers and with a strange starchy texture. You may want to reconsider planting your own bunny veggie garden (basil, cilantro, parsley, rosemary, etc). Or, in case you cannot make the shopping trip for some veggies, for one time only, you can give him some kale from the freezer. You can choose also to skip it for a few days. Water, hay, and a few high-fiber pellets will do the work.

The fresher, the better
Your bunny will better appreciate a fresh portion of spinach than a molded or yellowish one. Spinach stored in a pile altogether promotes mold. Rabbits are very sensitive to fermented food. While wilted spinach will not be refused by your rabbit, it's not healthy for him. You must avoid that too.

Can baby rabbits eat spinach?
For baby rabbits, a good time to introduce vegetables is when your little rabbit is about two months old. Before introducing any type of fresh food to your rabbit, he should eat some grass hay (as opposed to alfalfa hay) for at least two weeks.

Can wild rabbits eat spinach? Yes, they can, but be careful not to introduce spinach or other vegetables too quickly to them. Wild rabbits are not used to vegetables like this, with lots of nutrients, and can get diarrhea.

Other types of spinach plants (water spinach, Malabar spinach, mustard spinach) seem to be as reliable as the regular spinach. Still, when it comes to different variations of plants is better to avoid them if you don't know rightly how they were planted, grown, or harvested.